x64 Replacement/Alternative to Microsoft's IntelliMouse application.
Forum rules
Please read the forum rules before posting for the first time.
The more information you can provide, the quicker and more accurately someone can help.
NOTE: To reduce spam, new users can not post links, files or images until they have at least 4 posts.
Post Reply
5 posts • Page 1 of 1

XMBC Version: 2.19.2
Windows Version: win10
Mouse Information (brand/model): Logitech G502 Hero / Lightspeed, probably most/all mice
Relevant Computer Information (CPU, RAM etc): 9900K; 32GB 4000mhz
Did the problem occur after an upgrade of XMBC? (If so, from what version?): no
Did the problem occur after a Windows update/upgrade? (If so, from what version?): no
How long have you used XMBC?: >5 years
What language and keyboard layout do you use in Windows?: English / UK

Clear description of the problem - try and include as much information as possible, including what button and mappings you are having problems with (if applicable).:

With Windows Mixed Reality (microsoft's VR application) running, which is crucial to be able to run many VR headsets, the mouse becomes laggy. More specifically, slow movements are not registered. Fast movements work, however the movement ratio is not 1:1 - it's like the movement is being quickly decelerated. It's like those old x-box PC ports which used to crudely emulate controller thumbstick input from a PC mouse.

There seems to be some kind of conflict with WMR and X-Mouse's mouse capture - I can only guess.

Shutting all VR programs (including WMR, but not x-mouse) and then restarting VR sometimes fixes the problem - other times, although the problem exists, it's small enough to be ignored. It just seems to be luck.

It may have something to do with x-mouse's "override speed" option (which is very useful btw - thank you for this!) - I use this between games constantly. Changing mouse DPI settings from mouse application does not affect the issue.

I appreciate that you probably do not have a WMR VR headset to test this with... happy to try suggestions - I am not averse to registry editing / hex editing / hardware soldering etc.

Thanks for your time!
Top

I do have a VR headset (Oculus Quest) and Ive never noticed any problems myself when linked up to the PC (and as that uses USB, Id expect more problems because of the amount of data transferred across the USB bus) - but I must admit I don't use it all that often. Mostly just for Flightsim 2020 and HL Alex but of course neither of those games really use the mouse much while playing so maybe Ive just not seen the problem.

The override speed only changes the windows mouse speed setting (on the fly) so I doubt that has any particular impact. And off the top of my head I cant think of any clear and obvious reason there would be a conflict.... I guess I will have to try and reproduce this myself - but finding some time and getting all that out and setup will take me a while!

You're a gentleman Phil - no rush - I guess you have your plate full.

BTW, MS Flight Simulator 2020 in VR is pretty amazing, if you ever want to give it a try. Also VR modded games such as Subnautica and Outer Wilds.
Top

Yeh pretty full - although today I got a covid 19 positive test so I may be out of action for a bit (which ironically may give me a bit of time for XMBC - if I continue to feel well as I do right now - fingers crossed!)

I guess if its not an issue with oculus rift, I probably wont be able to reproduce t on my quest either

. So Im not really sure if there will be anything I can do. One thing you could try....

In Settings, Advanced Settings, what is the CPU priority set to? If its below realtime, try setting it to realtime and see it it makes any difference. Maybe the CPU is being overloaded and thus it will take more time to schedule XMBC to handle the mouse messages (a disadvantage of running in user mode using mouse hooks, rather than as a driver in kernel mode).

I know - as I said, thats all I have really used it for

Thanks for the insights Phil, I hope you feel OK.

When you said "Flightsim 2020" I thought there was a game called exactly that - I didn't realise you were talking literally about Flight Simulator 2020 - doh!

1.a.
I think Frame Interpolation will be very helpful to your 2070 Super! Please download the OpenXR developer tools from the Windows Store and enable Motion Reprojection. This will enable up to 3 additional motion-smoothed frames to be interpolated, so you can play a game that runs at 23fps, - at 90fps. That's 300% performance increase for 'free'! There are some interpolation artefacts around hud/crosshair elements sometimes in some games, but in my humble opinion, it works very well, and certainly a huge leap up from asynchronous warp and old reprojection tech which used fake frames, since it literally generates new in-between frames from motion vectors. 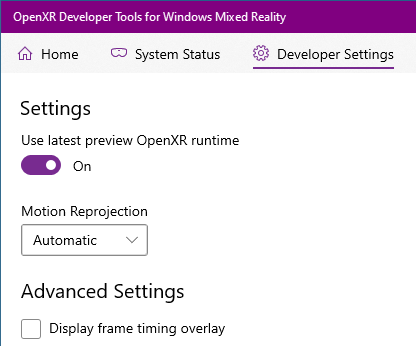 b.
In Alyx, or any game which uses OpenVR (as opposed to the new OpenXR standard), Oculus headsets can't use the Valve's Motion Smoothing (motion reprojection) if I recall correctly - Oculus just uses some cheap form of the old standard reprojection. However, there is an FSR injector which enables you to use DLSS-like upsampling to double your FPS. Certainly, using the medium preset, I have gained immense performance at the slight cost of image quality: https://github.com/fholger/openvr_fsr

Flight Simulator, using OpenXR, is not compatible with the OpenVR FSR injector... Hopefully there shall be an OpenXR FSR injector soon.

c.
With VorpX, which does a great job of converting normal flat games to VR, you are able to natively use OpenXR AND FSR simultaneously, as long as your headset supports it.

2.
Your mind is working brilliantly trying to pinpoint what might be causing the issue - My apologies however, I have not clarified what I mean by "lag". BTW, the priority is set to "High".

The problem only happens when I start VR, and resets when I exit VR. Restarting VR re-sets a random 'lag' intensity/affected axis, which is then permanent for the duration of the session until I either exit X-Mouse or the VR session.

I hope you get well soon; no need to worry about such trivial things which only affects a single user.

BTW, you might wish to add a dark-mode to x-mouse, as a lot of PC users use dark themes nowadays.
Top
Post Reply
5 posts • Page 1 of 1